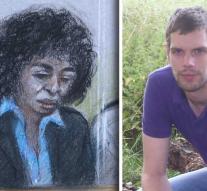 bristol - A South African woman who attacked her ex-boyfriend Mark van Dongen in the British Bristol with sour acid from Rijsbergen was acquitted of murder and manslaughter. The court declared the woman guilty of throwing a corrosive liquid over the Rijsbergenaar.

Berlinah Wallace had a relationship with Van Dongen living in Bristol. In September 2015, the Rijsbergenaar went to the Wallace flat to put a point behind the relationship. He stayed asleep in the apartment. When he was in bed, Wallace Van Dongen would have showered with an acid. The man was very seriously injured. Fifteen months later, he underwent euthanasia.

During the trial, Wallace told the jury that she thought there was water in the glass she threw over the Rijsbergenaar. Earlier she had admitted that she had bought acid.

The BBC reported that the court will give judgment in the case on Wednesday.