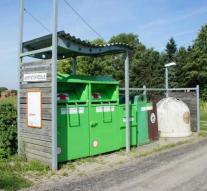 duisburg - The German police have arrested a 35-year-old woman from Duisburg because she may have killed two babies. One of the baby bodies was found last month in a Polish clothing sorting center.

Between the collected clothing from Duisburg, employees of the sorting center in the Polish town of Kielce found a dead baby on November 17th. The local police called the girl Mia. This is how the German newspaper De Bild reports.