Home / World / Wolves under the car in Germany 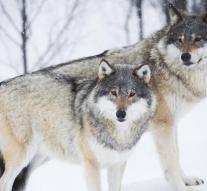 - On the roads in the German state of Brandenburg is in the dark days before Christmas not unusual for deer and wild boar are hit by motorists. Last week, however, were the three crossing wolves that died under cars in three accidents, which is quite unusual.

According to biologists in the state around Berlin are the victims young wolves that try to find at this time of the year for their own territory. therefore the probability that they run in areas where it is not known large.

Apart from the road the wolf does well in Brandenburg. Nature organizations counted this year, a record 52 cubs.