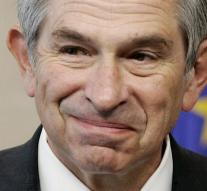 - Paul Wolfowitz, Deputy Secretary of Defense under Republican President George W. Bush plans to vote in the US presidential election on Hillary Clinton. That Wolfowitz said Friday in an interview with the German magazine Der Spiegel.

,, I wish there was a candidate I could support enthusiastically. I can not but choose Hillary Clinton, even though I have serious reservations against her. ''

The former president of the World Bank sees the Republican candidate Donald Trump as a security risk because of his admiration for Russian President Vladimir Putin and his outlook on China.,, It is important to make clear how unacceptable it is, '' says the man who is considered the architect of the US invasion of Iraq in 2003.


This characterization Wolfowitz denied, moreover, in the interview. According to him, many things would have been different if he really was the man behind the raid.