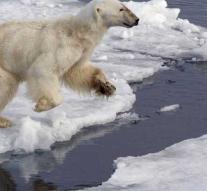 This confirmed Thursday the World Meteorological Organization (WMO), after they had already released figures last month, but the year 2017 was not yet finished.

That year was indeed one of the three warmest years since the measurements started. There were also many extreme weather conditions such as catastrophic hurricanes, debilitating heat waves and severe droughts.

Long-term indicators indicate that developments such as increasing carbon dioxide concentrations, sea level rise and acidification of the oceans remain very worrying. The ice surface in the Arctic remains below average and the amount of sea ice in the area around the South Pole is also reaching a low level.

The preliminary figures in the report State of the climate of the WMO show that the average temperature on earth in the first half of this year is 1.1 degrees higher compared to the temperature in the pre-industrial period. As a result of El Niño, 2016 is likely to remain the hottest year. 2015 or 2017 come in second and third place.