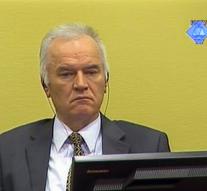 - Serbian expert witness in the Mladic trial last week was found dead in his hotel room in The Hague, has died of natural causes. This is evident from section, the OM has reported Monday.

Dusan Dunjić would testify Thursday before the Yugoslavia Tribunal in The Hague in the case against Ratko Mladic. The 72-year-old Mladic gave in the nineties led the Bosnian Serb troops that include killing thousands of Muslim men from Srebrenica.

Dunjić was found dead by hotel staff and a representative of the ICTY. He explained as an expert witness frequent statements before the tribunal.