Home / World / With regards to Europol 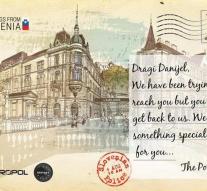 the hague - With a series of happy postcard cards on the EUMostWanted.eu website, Europol tries to find the residence of Europe's most dangerous fugitive criminals.

See the whole collection of postcards

The European Police Organization asks the public to share the postcards as much as possible to find out where these figures are.

It's about criminals who committed serious crimes and are likely to hide in a country other than where that happened. According to Europol, the usual detection methods have not yielded, hence the public's assistance is invoked.

The EUMostWanted website. Eu was launched early last year. Of the criminals who were seen there, 36 have been arrested in the meantime. Eleven of them were arrested due to information from the public. Four gave themselves.