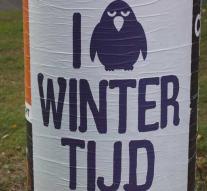 salzburg - The Netherlands, Belgium and Luxembourg should also keep the same time zone in the future. The prime ministers Mark Rutte, Charles Michel and Xavier Bettel agree in principle on this, after a short consultation of the three in the margins of an EU summit in Salzburg. They want to gauge the residents' preferences for the introduction of summer or winter time as standard time.

According to a spokeswoman, Rutte thinks it is 'fine' to tackle the issue jointly in response to the European Commission's proposal to put an end to clocking twice a year in the EU.

According to the EU plans, each country has to decide for itself whether it will switch permanently to summer or winter time in 2019. The member states will have to do something to scrap the EU regulation that regulates the clock ritual.

'It is our priority to make a joint decision and involve a number of neighboring countries,' Michel said. 'Think of France, Germany and Italy. 'This must be a form of consultation in the three countries. '