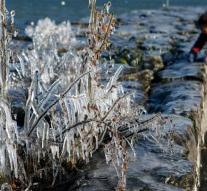 san francisco/rome - The wintry weather in the northern hemisphere has taken an icy grip. Places in Europe where winter normally speaking, a mild nature, are now visited by snow and frost.

The west coast of the United States unexpectedly confronted by snowstorms. California dominated for years absolute drought in the winter months. This time the snow falls, however, pouring from the sky. In the mountain ranges of the Sierra Nevada is 2 meters measured in some places. Along the coast icy rain falls across the landscape. Meteorologists predict more abundant rains, which could lead to flooding.

The famous Yosemite National Park's main access road closed to the valley for the next few weeks. The heaviest rainfall since twenty years the roads severely damaged and made inaccessible.

In large parts of Europe, snow falls in abundant quantities. For example, in northern Greece public life still to a large extent. In the port city of Thessaloniki, the temperature dropped to 7 degrees below zero and the temperature is around freezing in the capital Athens.

The cold sank in Italy until the deep south. The flanks of the volcano Vesuvius near Naples are covered with snow and really southern, in the city of Bari is 15 centimeters snow. Rail and road traffic are severely affected.

Closer to home, in the icy Flanders, Saturday was 1,500 tons of salt keep the roads passable. In Germany and the other Alpine countries it snow for days plentiful. Again there is a lot of traffic.\n  \n  \n   advertisement

The lowest temperature was measured in northern Finland, where the mercury dropped more than 40 degrees below zero.