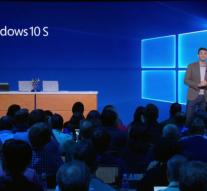 redmond - Windows 10 Home and Windows 10 Pro get a brother: Windows 10 S. Microsoft presented the education-oriented edition of Windows Tuesday. According to Microsoft, the new Windows variant is faster and safer and therefore seems to be able to compete with Chrome OS.

At first glance, Windows 10 S seems to be a tricky version of the world's most popular operating system for desktops and laptops. The big difference with Windows 10 Home is that you can run S only apps that come from the Windows Store while you can install all of Windows 10 compatible applications in Home. It's not for the first time that Microsoft comes with a Windows variant that can only be extracted from the Windows Store. Windows RT did that earlier. Otherwise, it had to do with the processors for which RT was made.

For business users, S will not be very interesting at all. For them, Microsoft has Windows 10 Pro. That version supports things like remote desktop and Microsoft's BitLocker encryption technology.