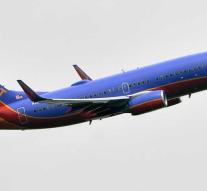 cleveland - A plane from the American airline Southwest Airlines had to make a precautionary landing after a problem had arisen with one of the windows in the plane. News channel CNN shows a photograph of one of the passengers on which a cracked airplane window can be seen.

CNN reported that it is Southwest flight 957 from Chicago to Newark. The captain could safely land the aircraft at the Cleveland airport in the state of Ohio, confirms the American aviation authority FAA.