Home / Tech / William wants to tackle cyberbullying in US 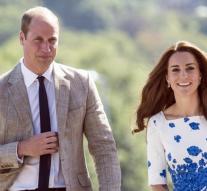 - Prince William might be traveling next year off to the United States. According to The Sunday Times wants the British prince there with the directors of tech giants like Google, Facebook, Microsoft and Apple talk about internet bullying.

Britain's Prince called the task force in his own words in life because he himself is a father. William and his wife Kate have two children, Prince George and Princess Charlotte. According to The Sunday Times wants the Duke of Cambridge in the US, the bosses of the tech giants urge to do more against Internet bullying.