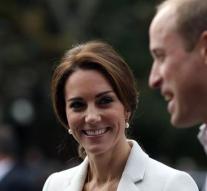 - British Prince William and his wife Catherine expect their third child in April. The baby is later the fifth in line to follow the current Queen Elizabeth.

The couple told Tuesday in a brief statement that the baby is expected to be born in April. The couple announced last month that the duchess is pregnant again, but still left in the middle when it was calculated.