Home / World / William and Catherine at commemoration of Ypres 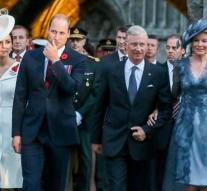 ieper - Prince William and wife Catherine attended the Battle of Passendale on Sunday in the Belgian Ypres. It took place a hundred years ago. They were accompanied by King Philip and Queen Mathilde at the ceremony.

During the First World War, tens of thousands of soldiers were killed in the trenches around Ypres and Passendale. In memory of the fallen people, the British in Ypres founded the Menenpoort, where every last night the Last Post is played. On the gate are the names of 55,000 missing soldiers. On a wall at the Commonwealth Cemetery Tyne Cot at Zonnebeke there are another 35,000 names. They did not fit on the memorial gate anymore.

Sundays were the royal couple and the Duke and Duchess of Cambridge at a number of commemorations in Ypres. Monday there are ceremonies in Zonnebeke, where Prince Charles will be present.