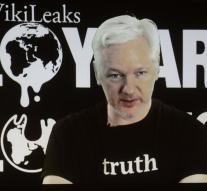 london - WikiLeaks has called on his supporters to keep up with the cyber attack against the United States. 'Assange is still alive, WikiLeaks published yet. We ask supporters to stop shutting down the US Internet. Your point is taken, 'the site writes on his Twitter account.

It is not clear why WikiLeaks stresses that its founder Julian Assange is still alive. Alternative sites will have a few days of speculation that he was deceased. Assange has spent years hiding in the Embassy of Ecuador in London, because he is afraid he will be arrested and extradited to the US Earlier Friday WikiLeaks published a photograph of armed agents who would stand outside the embassy building. WikiLeaks has a lot of secret US documents in recent years brought out.

The Internet in the United States Friday disrupted by a DDoS attack on the company Dyn. Many sites have become inaccessible. It is not known who is behind it and what is the motive.