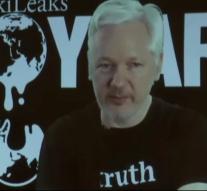 london - WikiLeaks founder Julian Assange on Tuesday made no great revelation about Hillary Clinton, as some had expected.

Assange spoke via video link from the Ecuadorian embassy in London during a press conference on the occasion of the tenth anniversary of the whistleblower website. He indicated that by the end of the year or incriminating information is published, including three 'powerful organizations' in three different countries.

'In the coming weeks there will be an avalanche of published documents. I know that on this press conference a lot of expectations arose, but today there will be no grand revelations, 'says Assange.

Assange was further discussed the past decade. WikiLeaks published at that time 10 million documents. On average about 3,000 documents per day and 10 million words in total. Not only the content of those documents fiber is interesting, but also the responses of governments to the public of information are significant, according to the Australian. The total document compares Assange to the library of Alexandria; a wealth of information.

Furthermore, Assange asked for donations to be able to keep the future alive his romantic dream.

Assange initially wanted to make a speech from the balcony of the Embassy of Ecuador in London, where he is in exile. For safety reasons, the plan canceled and replaced by a video conference in Berlin.\n  \n  \n   advertisement