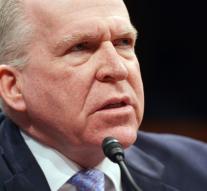 - WikiLeaks has published Wednesday personal mails of CIA chief John Brennan. According to the whistleblower site will follow in the coming days more documents.

It would be emails from a personal e - mail account was hacked Brennan this week. According to WikiLeaks also used the CIA chief 's account occasionally for secret work-related mails.

John Brennan joined in 2013 as director of the CIA nlichtingendienst. He succeeded David Petraeus, who had to leave because of an extramarital affair with the woman who wrote his biography. He would have skewed its confidential information.