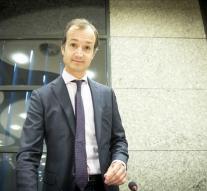 - Around the establishment of the exorbitant severance scheme in the tax was Wiebe Secretary (Finance) in control of the affairs lost.

That the House gave the VVD minister finally admitted after Thursday had sawed him about how it is possible that he was completely on the sidelines when a 'gilt-edged' scheme was rigged which was pushed by hundreds of millions of euros. Meanwhile, he has placed the service in receivership.

Wiebe had deep dust during the debate. 'The stone in my stomach has not diminished. I should have sent harder on the procedures, 'he said. He also acknowledged that it had underestimated the culture of 'informal', and 'negligence' is so persistent. 'I have no doubt let me also carried away in that informality', he surveyed his role. 'I assumed that was checked rigorously in the process by the internal watchdogs. '

Since the scheme was expanded enormously unbeknownst to Wiebe, in particular, was older officials signed quite attractive and there was a lot more people than intended. Altogether, some 2,700 employees of 64 years or over just before retirement to fill their pockets with amounts which are in many cases around 75 000. Moreover, there is a disguised early retirement scheme with the result that the tax authorities had to impose a hefty additional tax to itself.

When Wiebe's there in the spring found out how things had gotten out of hand, he tried to put the regime stop as soon as possible, he said during the debate. 'In addition, the position of the government was very weak,' he said of the talks with the unions that followed. The agreements were already in force. 'It was uphill negotiate,' said the State Secretary. Eventually the plug could still be pulled from September onwards. Otherwise, the costs were probably much further on.

Thereafter, the Secretary of State is going to look just how it all could have gone so wrong. 'All the arrows were first addressed those rules to conclude as soon as possible. Then it was discussed how this could have happened. I propose that while the question of Mr. Omtzigt (CDA) have accelerated that process. '\n  \n  \n   advertisement

D66 MP Van Weyenberg asked them whether 'if the Chamber had not squeaked' would have intervened anyway. 'In retrospect one can say that it was desirable to do it earlier,' acknowledged Wiebes.

The Minister promised to let the NCA investigate the effectiveness and legitimacy of the reorganization of the tax authorities.