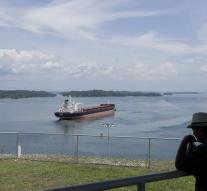 panama - International shipping experienced a landslide when more than a hundred years ago, the first ship sailed through the Panama Canal. More than a century later, causing the opening of the widened and deepened channel, next Sunday, may again turn around.

Last year 960 million cubic meters of cargo transported through the canal, a record. The widening is 1.7 billion cubic meters annually freight from the Atlantic to the Pacific to sail, or vice versa. The huge ships in the old channel could carry up to 5,000 shipping containers bear the new so-called Panamaxes to 13 000 containers. Thereby changing the way freight is moved across the world.

Shipping from Asia chose often in the past to resolve on the west coast of the United States, after the freight by rail or road was further transported. Now the Panama Canal gets much more capacity, they will choose more often to sail to ports in the south and east coast.


The expansion is a major battle of Panama in competition with the Suez Canal. The trip from Shanghai to New York takes 26 days, while the route through the Suez Canal two days longer occupies. The Suez Canal, however, has no height, while the ships in Panama in 20 to 30 hours to climb up to 26 meters above sea level and descend through a series of locks.

Panama expects to significantly benefit from the extension. 2021 could double the annual income of the channel up to $ 2 billion (1.8 billion euros) per year. The opening of the widened channel next Sunday also celebrated in the presence of heads of state, government and ministers. On behalf of the Netherlands Deputy Prime Minister Lodewijk Asscher present.

The widening and deepening of the channel has worked since 2007. The Dutch engineering company IV-Groep designed the doors of the new locks.