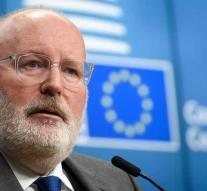 brussels - There is widespread support among EU member states for the way in which the European Commission is trying to bring Poland in line. The laws with which the Polish government puts the judiciary under political control are causing many countries, including France, Germany, the Netherlands and Denmark.

Vice-President Frans Timmermans set up the heaviest instrument (Article 7) in December, which meant that Poland could lose its voting rights in the EU. On Tuesday in Brussels, the Dutch talked to EU ministers for European Affairs about his dialogue with the conservative government in Warsaw. The Bulgarian Deputy Prime Minister Ekaterina Zaharieva, who chaired the meeting, said he was very positive about this.

The dialogue is only useful if it produces results, Timmermans said. He expects a response in the short term to his recommendation to amend four laws. 'I remain hopeful that we will see positive steps. '

The rule of law is the foundation of the EU and the independence of the judiciary is one of the most important building blocks of this, Timmermans summarized the position of the ministers. Poland does have the right to reorganize its legal system, but that can never be an excuse for political control over the justice system, he argued.

If the Polish reaction and the continuation of the dialogue are not satisfactory, the ministers will have to make an assessment. At first they must then answer the question whether there is a clear risk of a serious violation of European values. A subsequent step could be to deprive Poland of its voting rights, but this is only possible if all EU countries agree. Hungary has already said that it will not support that step.