Home / World / Why was an attack on Zimbabwean president? 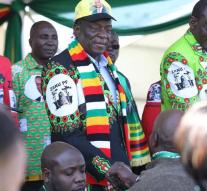 harare - The police have not yet been able to discover a motive for the Saturday attack during an election meeting of Zimbabwean President Emmerson Mnangagwa.

He spoke to thousands of supporters at a stadium in Bulawayo when an explosion occurred. As a result, 49 people were injured. The successor to Robert Mugabe remained unharmed and was immediately brought to safety after the explosion.

Vice President Constantino Chiwenga, the general who forced Mugabe to resign in November, spoke of a 'terrorist act' on Sunday. However, this can not disturb the next ballot. On 30 July the Zimbabweans will elect a president, parliament and local government.

'The police are hunting these criminals to take them to court,' said Chiwenga, whose wife was one of the victims, on campaign in Chitungwiza, 30 kilometers south of the capital Harare.