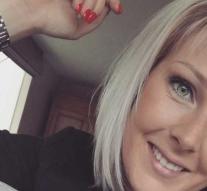 tienen - Who killed the 24-year-old hairdresser Julie Quintens? 'We want to know what happened to her,' says father Peter.

The young blonde hairdresser from Tienen in Belgium was found dead by her father last week in her apartment where she lived for two years. He had gone to watch because she did not show up at work.

After autopsy the conclusion is that Julie has been killed by violence.

Peter would rather not speculate about what happened to his daughter. 'As long as we do not know what exactly happened, we would rather not elaborate on what has happened in the last days. We want the police to do its work without endangering the investigation. Although it is also very frustrating: the police do not keep us informed, 'he says to Het Nieuwsblad.

Friends and colleagues of the hairdresser are in mourning. 'But why? You are still too young, 'writes a friend on Facebook. 'Such a nice, spontaneous, sweet and handsome woman. This is not fair? You had a whole life for you. You have not always had it easy, but you were just as happy again. '

Her colleagues at the hair salon 'New Look' in Boutersem are also excited. 'The day you died, all color has departed from this world', they write on Facebook.