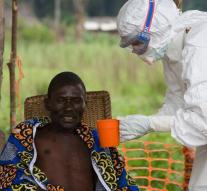 kinshasa - Again there is an infection with ebola established in Congo. That said the World Health Organization (WHO) on Sunday. Another seventeen people may also be infected. The WHO is now conducting extensive research. A total of 125 people were investigated who had contact with suspected infectious persons.

The outbreak occurs in a remote area. That's a good luck in an accident. The WHO has already stressed that the contamination is nevertheless taken extremely seriously.

This latest ebola eruption is the eighth in the history of the country. The deadly viral disease was first discovered in the dense tropical forests in 1976 and named after the nearby Ebola river.

In 2014, 42 people were killed in the Democratic Republic of Congo by the virus. At the same time, the disease killed 11. 300 people in Guinea, Sierra Leone and Liberia.