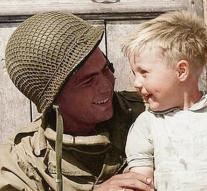 bayeux - On June 10, 1944- shortly after D-Day- Trévières was liberated in Normandy by soldiers of the American 2nd Division. Soldier first class Fred Linden was on the occasion with a happy young resident of the French town on the picture.

Relatives of GI Linden found the picture recently and are now looking for the boy. That will be at age, end 70 presumably. 'Maybe this boy is now a grandfather who recognizes himself, or perhaps recognizes his family,' said Glen Gater, married to a cousin of soldier Linden.

The relatives of the American military are wondering what the boy is doing in the picture and hoping to get in touch with him. Anyone who knows the little boy or has a suspicion about who it is, can contact the regional French newspaper La Manche Libre.