Home / World / Who is following Al-Baghdadi? 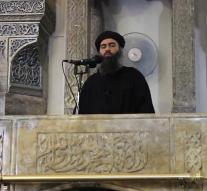 baghdad - With the possible death of IS leader Abu Bakr al-Baghdadi, the big question is: who is following him? Largest contenders are two former officers from Saddam Hussein's army. Not strange because the backbone of Islamic State is formed from the beginning by soldiers of the former dictator, which was sold by America in 2003.

The follow-up of Al-Baghdadi is not settled. A special council must decide on it. It is unclear whether the eight members, while the caliphate is collapsing, is able to meet. The new leader of IS will probably not get the title 'kalief', which emphasizes the ending of the caliphate- after the fall of Mosul and other cities-.

The two potential successors are Iraqi Iyad al-Obaidi and Ayad al-Jumaili. The first is now Minister of War, the second leads a security service within IS. However, they do not have the religious background of Al-Baghdadi, who studied all of his life Islam and claims to be a direct descendant of the Prophet Muhammad. The new leader of IS also has no 'Ard al-Tamkeen', either a stable country to rule over, which he will probably get the title emir (prince). Just like Osama bin Loading, the former leader of Al Qaeda.

Al-Obaidi, also known as Saleh Haifa, is a fifty formerly responsible for the finance within IS. He was placed on the US 'most wanted' list last year. Al-Jumaili is a little younger and comes from Fallujah, the city that the Iraqi army once again recycled on IS. Media reported earlier this year, but it has never been confirmed.

The leadership of the terrorist army has been well-developed last year. Possible successors of Al-Baghdadi, such as his second, Abu Ali al-Anbari and Abu Mohammed al-Adnani (the 'Goebbels' of IS) have been killed. Incidentally, those deaths were confirmed by IS itself. That has not happened with Al-Baghdadi, so there are doubts about the reports that report his death. Thus, IS was extremely critical of the Afghan Taliban, who concealed the death of their leader, Mullah Omar, for years.

In addition to Russia, Syria and Iran, it is now said that it is usually reliable Syrian observatory for human rights to have information that Al-Baghdadi is dead. The organization, based in Great Britain, says to rely on sources within IS. Where and when he would have died, it is unclear.