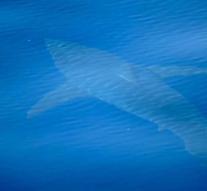 amsterdam - Holidaymakers who are going to Spain soon may have to be careful on Mallorca. A white shark was spotted near the city. According to scientists, that is remarkable: the last time the white shark was seen was thirty years ago.

The researchers were on scientific expedition when they accidentally stumbled upon the white shark. They photographed the beast and shared their picture on Facebook. The shark is about five meters long. The animal was photographed at the island of Cabrera, 13 kilometers from the coast.

White sharks, which are also called 'sharks', can be very aggressive and regularly attack people, mostly in Australia, South Africa or on islands in Central America. They are regularly in the news through attacks on surfers.