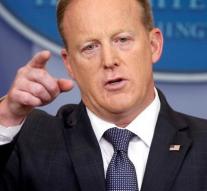 washington - The White House could not or did not say Wednesday's Wednesday night if US President Donald Trump made a decision on whether or not to withdraw from the United States climate convention. 'When the president has made a decision, he will announce it himself and then he will explain what the basis is,' said spokesman Sean Spicer.

Trump himself told reporters that he would 'come very quickly' with a decision. According to various American media, he has cut the knot and will withdraw the US from the treaty.