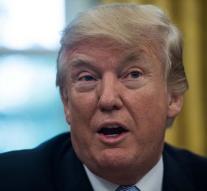 washington - The White House has identified Republican Congressmen that there will be no shutdown in October if no money is being deducted for the construction of a wall on the border with Mexico. That has revealed the Washington Post on Friday.

According to the newspaper, the road for parliamentarians is to close a budget share for the short term. Congress has only allocated funds for government projects until the end of September.

President Donald Trump had threatened to close the government closures and send the officials home- a shutdown- if a $ 1.6 billion budget would not be available for the construction of a new piece of border wall of about 120 kilometers and a second fence. That was his main election promise and he is holding on to it.

Even though there is no need for an emergency solution for the period October to early December, Trump wishes to see that the financing of the wall is part of the budget proposals in December.