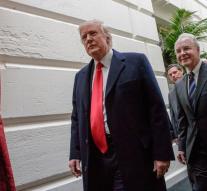 washington - The Trump government will provisionally meet Obamacare's financial obligations. Low-income Americans can pay their health insurance thanks to this subsidy. The White House announced Wednesday that it is not yet clear what will happen in the future with the care allowance.

'We have decided to continue and to continue the payments, but we have not yet made a final decision on future engagement,' said a government representative.

Trump already promised in his election campaign that he would put an end to the 'impoverished' Obamacare as soon as possible, but received no support in Congress. That has to be a matter for Friday on the budget proposals. In order to meet the Democrats as well as some Republicans, clarification was desired about the continuation of affordable health insurance for as long as it takes.