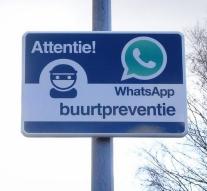 amsterdam - The number WhatsAppgroepen explodes against burglars. There are now about 4,100 registered community groups to warn each other against suspicious figures. In addition, there may still thousands unregistered.

The police are happy with this development. According to Sybren van der Velden, national project leader burglary of the National Police, the strong rise of the WhatsAppgroepen depends partly together with the decrease in the number of burglaries.