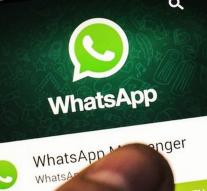 - Whatsapp is mainly used to chat, but users increasingly find their calling function. Every day as many as a hundred million calls perpetrated through the app.

The feature was introduced in 2015. It is the first time that the Facebook daughter disclose the number of calls.

Whatsapp has more than one billion users who use the app at least once a month.