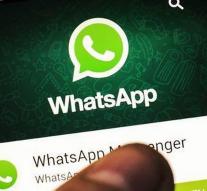 - Facebook is going to use WhatsApp's messaging service for companies. They get a hallmark that helps to speed up contact between business and consumers.

That is a social networking blog. For the time being it is a free service.

Facebook employs over a billion users who, after the start-up, especially with people-to-people contacts, increasingly communicate with companies that search or access WhatsApp customers due to poor service.

According to market researcher Telecompaper, three-quarters uses the app daily to send messages.

KLM would be known as the first airline with such a business account on the network with 12.1 million accounts in the Netherlands.

According to the blog post NRC Handelsblad writes, users still doubt that they are not sure whether the companies are who they claim to be on the network. Facebook wants to guarantee the authenticity of companies.

Users of the network purchased in 2009 by Facebook then see a green icon, the signal \u0026 nbsp; according to WhatsApp that the network knows and controls the company.

The guidance is provisionally free for smaller companies for WhatsApp tests. In addition, it looks at multinationals looking for a global contact.