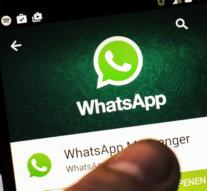 amsterdam - The Prosecution increasing burden of encryption communication services like WhatsApp. Prosecutor Martijn Egberts says reports of suspects can be hardly deciphered and that causes problems.

What is going on? Since April WhatsApp encrypts all calls encrypt account of the chat service. In this way, hackers, and also employees of WhatsApp, no longer read the messages.

With the so-called end-to-end encryption, only the sender and the receiver decode the message. The feature was already available in parts of the app, but it now applies to all messages you send and receive.


When the function is in force users get the following view: 'For messages that are sent to this chat and calls you make from now uses end-to-end encryption. Tap here to learn more. '