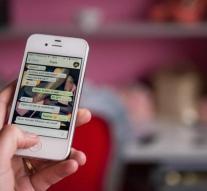 - A judge has put an end to the blockade of WhatsApp in Brazil. This was reported by The New York Times Thursday. The blockade lasted 48 hours but eventually barely held up half a day.

Justice in São Paulo wanted to force the blockade WhatsApp to cooperate in an investigation. Where exactly research is about, is not known. In a rather secret case a judge decided that the blockade unfair was.

WhatsApp is owned by Facebook. Founder and Director Mark Zuckerberg spoke of a sad day for Brazil when the blockage has been set. According to him, 100 million users in the country suffer.

Concurrent benefits Telegram. The company got in a few hours, 1.5 million new Brazilian users. The systems of that service can hardly accretion.