Home / World / What is the climate treaty without the US? 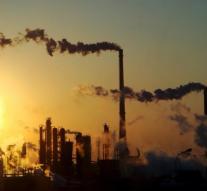 washington - US President Donald Trump announces in a few days if he withdraws his country from the Paris climate convention. According to sources in the White House, Trump has already taken his decision and withdraws the signature of his predecessor Barack Obama. What does the climate treaty of Paris entail and what are the consequences if the Trump government no longer participates?

The climate conference of Paris took place at the end of 2015. It was the 22nd climate summit of the UN conference UNFCCC. After previous toppings failed, it was possible in Paris to make clear agreements about reducing greenhouse gas emissions.

Nearly two hundred countries put their signature under the agreement. Only a few nations saw it: Syria and Nicaragua. The countries agreed to take measures to ensure that temperatures do not rise above 1.5 to 2 degrees Celsius this century. It has also been decided that richer countries will provide financial assistance to countries vulnerable to the effects of climate change. For example, islands threaten to run under water as the sea level rises

If the US is indeed withdrawing from the climate treaty, that does not mean that the agreement has no value anymore. The treaty concerns the period after 2020 and comes into force after ratification by 55 countries, which jointly expose more than 55 percent of greenhouse gases. Greenpeace points out that the US accounts for about 15 percent of greenhouse gas emissions and that the required 55 percent is thus also taken without the US.

Furthermore, environmental groups and many politicians think that globalization of global warming will continue without the participation of Trump. Also in the usa 'The growth of the sustainable industry has taken such a blast. That train is no longer possible, even in the US, 'predicts Greenpeace. The organization points out that American business will continue to devote from Washington to sustainable growth. The same goes for separate US cities and states such as California and New York.

If Trump terminates participation in the climate agreement, this does not mean that he is immediately relieved of it. According to experts, the formal withdrawal process lasts for three to four years and therefore approximately the entire term of Trump's current term of office.