Home / World / What is Puigdemont going to explain? 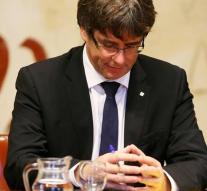 barcelona - What will Catalan Prime Minister Carles Puigdemont explain on Tuesday night? Insiders suspect it might be a long evening. According to the Catalan government spokesman Puigdemont is 'very clear'. Whether Puigdemont immediately raises independence, he did not want to say. One thing is clear: all of Spain looks forward to the speech the Prime Minister will hold in parliament.

What can happen? There are two possibilities: the first is a 'hard' unilateral divorce from Spain: the DUI: the Unilateral Declaration of Independence. (memory stick: speak out like 'bye'). Puigdemont will call Catalonia in that case as a stand-alone republic.

In that case, the Spanish government is likely to intervene. It is obvious that Article 155 comes into force. In fact, Madrid has the free hand to do what it considers necessary in order to restore order in the region: Puigdemont and Vice President Junqueras are likely to be slapped and the board is taken over and the Catalan parliament and government dissolved. Spanish police services will be in the Catalan streets for a long time, and perhaps the army will be deployed.

The other option is that Puigdemont chooses a 'symbolic partition', with the consequences much less drastic. A party fellow of Puigdemont of PDeCAT, Marta Pascal told the BBC that it will happen. Then there is no immediate unilateral divorce, but a kind of tribute to the outcome of the referendum.

It might be that Catalonia will then have a six-month period in which the region first seeks recognition and support at international level- and perhaps even with the Spanish government.

Puigdemont is under pressure in various ways. The separatist civilian movements ANC and Omnium are pushing for a 'hard' DUI. Fans of this movement gather during the statement of Puigdemont before the parliament. Also, the CUP, the extremist splinter party with whom he forms a government, demands a unilateral declaration of independence.

On the other hand, Puigdemont is under pressure from leaving business, the hard statements of the Spanish government and the sad scenes that Rajoy and their sketches outline. But those who can work counteractively, and make the Generalitat look no other than the 'flight forward'- and actually call out the DUI.

The popular mayor of Barcelona, ​​Ada Colau, called on 'both sides' to dismiss hard positions and thus the DUI and Article 155. They also stated that the results of the October 1 referendum were not ratification for the exclamation of the independence.

Last weekend there have been massive protests for the national unity of Spain and there is an exodus of companies from Catalonia. In some places in western Catalonia bank accountants have taken up their savings due to the turmoil, Spanish media reported.