Home / Tech / What do we get from Apple now? 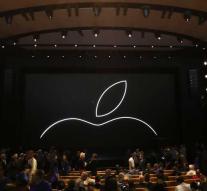 - A year after the announcement of Apple's iPhone X, a new series of iPhones is announced during a live event at the Steve Jobs theater in Cupertino, California.

Earlier today it leaked that three models are announced: the XS, the XS Max and Xr.

Attending the event at the Apple headquarters is not for everyone, but there are live streams (for example here: https: // www.apple.com / apple-events / september-2018 /) and we have reporter Lenno van Dekken who twitter report.