Home / World / What did the 15 agents do with Khashoggi? 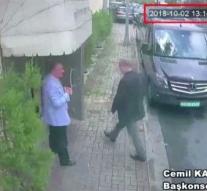 riyad - The Turkish police and intelligence services minutely follow the corridors of a team of fifteen Saudi agents that are held responsible for the mysterious disappearance of Jamal Khashoggi. In addition, they will soon start an investigation at the Saudi consulate in Istanbul, where the prominent journalist was last seen.

Turkish media report that on the day of the disappearance two private aircraft from Saudi Arabia landed at the Atatürk airport in Istanbul. The aircraft are owned by a company that often cooperates with the Saudi government. On board were a total of fifteen Saudi officials and intelligence officers.

The first aircraft landed very early in the morning, after which nine agents checked in at two hotels near the consulate. They would stay for three nights, but left that same evening. The second plane had six Saudis on board, who had just enough time to travel up and down to the consulate and then fly back to Saudi Arabia via Egypt.

Camera images show that Kashoggi entered the building of the consulate at 13.14 hours that day. He was under pressure from his future father-in-law to arrange his divorce papers so that he could marry his daughter. The Turkish employees of the consulate had that day- to their surprise- been released.

More than two hours after his arrival, a convoy of cars drives out. A Mercedes van with blinded windows and a diplomatic license plate, where boxes had been loaded shortly before, stops shortly at the nearby residence of the consul-general and then continues his journey.

The Turkish authorities are particularly interested in this van, where possible Khashoggi- whether or not in life- in it. The investigative services check the images of cameras along the motorways to find out where it was going. The Turkish police believe that the agents have taken the images from the cameras within the consulate.

The Turkish police first assumed that Khashoggi was murdered horrifically, but now keeps the possibility open that he has been abducted.