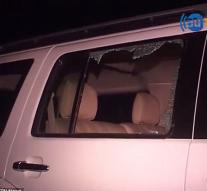 kabul - In Afghanistan, an American and an Australian professor kidnapped. They were threatened outside the university in Kabul with a rifle, as Australian media report.

Internet circulates a video of the car in which sat two professors. The windows are shot out. The abduction was confirmed by an Afghan police. The kidnappers would have worn uniforms of the Afghan security forces.

The two scientists both worked at the American University of Afghanistan, the only private university in the country.


Earlier this week, the Taliban opened fire on a group of international tourists. There were seven minor injuries.