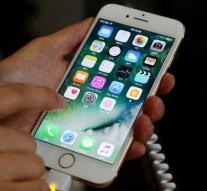 amsterdam - It looks as if the rack is from the Western European demand for smartphones. An estimate by GfK shows that this year about 133.7 million handsets go over the counter, 1.7 million fewer than in 2015. Worldwide smartphone sales is still on the rise.

In the third quarter were 33.4 million smartphones sold in Western Europe, 400 000 units over a year earlier. However, the increased sales in the quarter is too small to 'save' the year. The expectation is that taken slightly weakened demand throughout the year. The same is true for Latin America, there has been sales for the year decreased by 4 percent.

That worldwide still considerably more smartphones were sold in 2016, nearly 100 million units more, mainly due to China. Sales there rose by 15 percent.