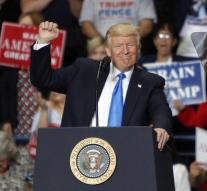 washington - The decision of President Donald Trump to resign transgenders from the US Army was a military decision, taken after consultation with his national security team. The White House will work with the Pentagon on how this policy plan will be implemented in accordance with the legal guidelines.

'I can imagine that the Department of Defense is taking control,' said spokeswoman Sarah Sanders Wednesday. Responsible Minister James Mattis was immediately informed of Trumps decision to ban transgenders from active service. Whether or not that will have an impact on, for example, the military troops sent to Afghanistan, Sanders could not say.