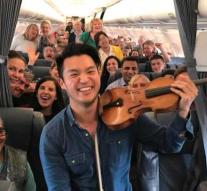 postage - Delay is less annoying when Ray Chen (29) is on the plane. The 29-year-old violinist managed to put a smile on the face of many air passengers during an emergency landing in Porto.

Flight 663 of the Portuguese airline TAP was on its way from Amsterdam to Lisbon when the aircraft had to land in Porto for unclear reasons. Everyone had to stay on the plane for an indefinite period of time.

'I have to admit that playing the violin was the last thing I had in mind, but I know how stressful delayed flights can be and so decided to grab my Strad for a nice aircraft performance', Chen writes on Facebook.

'Lucky birds', write several fans under the message of the violinist. The Australian Chen has about 140,000 followers on Facebook. 'Why was not I in that plane', someone reacts. Another: 'I was hoping for a delay of five hours!'