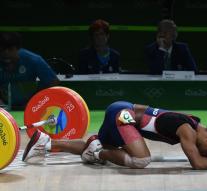 - A sad day for the Thai weightlifter Sinphet Kruaithon. The joy after gaining was a bronze medal at the Olympic short-lived, when there suddenly came only from the home front news.

His grandmother had a large group of people the game of her grandson followed on television in Thailand. After it became clear that Kruaithon bronze had to address, the party erupted. That the grandmother was fatal; she was struck by a heart attack. CPR to no avail. The grandmother had just before her death yet given an interview to a local television station. In it she said she misses her grandson and will continue to encourage him enthusiastically.

The weightlifter was told the bad news after the podium ceremony. He won bronze in the under 56 kg.