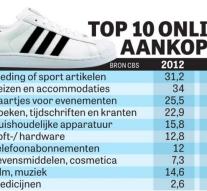 - Medicine and food are the strongest climbers in the top 5 of goods purchased on the Internet. According to new figures from the Central Bureau of Statistics (CBS) on web purchases in the Netherlands.

The online sale of medicines and foodstuffs since 2012 no less than doubled. Of consumers questioned CBS said 70 percent of the Internet said they had bought drugs.

Nearly one in five online buy food. The purchase on the internet of financial products such as insurance, loans and equities is on the rise.

The large increase in older people who fall are going to buy stuff on the Internet. Of all age groups, the proportion of a shopping online over-65s has increased most in recent years. Since 2012 it rose by 46 percent.

Seniors go online mainly for the purchase of books or magazines. Young people buy slightly more than average concert ticket, and hardware or software. Of all age groups buy 25 to 65 year olds, most household appliances in shops.