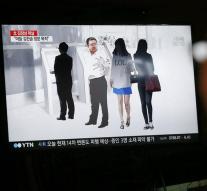 kuala lumpur - Police in Malaysia have arrested a second woman suspected of involvement in the murder of Kim Jong-nam. The half-brother of North Korean leader Kim Jong-un was attacked Monday at the Kuala Lumpur International Airport and died later in a hospital.

The arrested woman had an Indonesian passport in his pocket in the name of Siti Aishah (25). She was identified on the basis of TV images. The authorities think Kim Jong-nam was killed with an injection through a needle or through the use of a noxious spray.

Wednesday another woman already was arrested in possession of Vietnamese travel documents in the name of Doan Thi Huong. She was recognized on the basis of camera images that were taken at the airport.

Earlier, a taxi driver was arrested in connection with the murder, as British media reported Wednesday. He would have picked up two women at the airport which would have poisoned Kim Jong-nam, possibly with injection needles. According to South Korea is the North Korean regime behind the murder and Kim Jong-un himself instructions. The women were North Korean agents.

The 46-year-old half-brother from behind his face was grabbed when he was waiting for a flight to Macau.