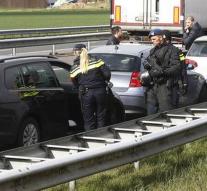 - Holidaymakers who want to the south by car, also face Sunday with long queues at the Belgian-French border, the Traffic Information Service (VID) reports. In total, between Belgium and France 21 kilometers to border congestion. Especially on the A16 between Bruges and Calais is much traffic congestion, according to the VID.

After the events in Nice introduced a new border control on the road. This leads to congestion in both directions. The A16 is a major route for Dutch holidaymakers towards Brittany.

The controls on the E17 (at Rekkem) and the E19 (in Hensies) cause delays. The files are Sunday in both cases, seven kilometers long and provide an extra hour of travel time. The VID advises Dutch to drive through Tournai (E42).