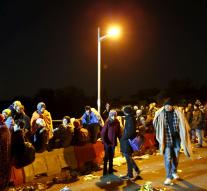 passau - The influx of refugees to the German-Austrian border continues. Tuesday, thousands of refugees have again arrived at Passau, where on Monday 8 000 migrants reported.

Throughout the day came during 5500 refugees arrived in Passau and villages in the area. They are housed in different event halls. Wednesday morning they are taken by train to other shelters in Germany.

Monday Passau was raided by the sudden influx of migrants that came forward without that Austria had warned. Tuesday the arrival of humans was somewhat more orderly, said a police spokesman.