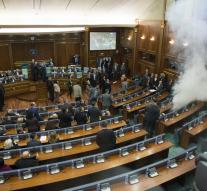 - For the third time in a few weeks the opposition in the parliament of Kosovo has put the deliberations crippled by the meeting room full of tear gas. Even extra police in the parliament building could not prevent the Party for Self-determination anyone with the gas chased out.

The opposition protests against a government measure that gives the Serb minority in the country more autonomy. Which came about through the agency of the EU. According to opponents of the measure threatens the unity of the country. They want the proceedings in parliament as long remain upset for the government to withdraw the measure.