Home / World / Weather shoe washed up with foot in Canada 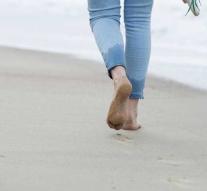 gabriola - The Canadian police found a shoe on the British Columbia coast with the remains of a foot in it. The sinister find does not stand alone, it is the fourteenth time that a shoe washes with foot on the shores of the Canadian province. The mystery keeps the emotions busy and there is pressure on the origin of the feet.

The last foot in the series was found on Sunday at the coastline of the island of Gabriola near Vancouver. A man walked unsuspectingly along the beach when he met fourteen on foot.

The wildest stories have been around since the mysterious finds in British Columbia. For example, the shoe finds could be linked to natural disasters, such as the tsunami in 2004, or plane or boat accidents. Others find the theory that the separated feet would be the work of a serial killer with a sports shoe fetish more plausible.

Also jokers like to get away with the foot mystery. 'There are also dog bones in shoes found on the beach,' said coroner Barb McLintock to The Guardian in 2016. Even creative crafts with chicken bones were used to put people on the wrong foot.

The last foot was found in December 2017 by a hiker who walked with his dog along the southern coast of Vancouver Island. His dog hit on 'an object' that stuck out of the seaweed. When the man took a look, it turned out to be a shin and calf bone in a white sock and a black shoe. Corroboras later reported that the foot belonged to a 79-year-old missing man from Washington who was later found dead. That research is still ongoing.

Eight of the fourteen feet have been identified. There were also two pairs. The identified feet all belong to men.

In an attempt to identify the foot found on Sunday, it is currently being investigated by a forensic team from the Canadian police.