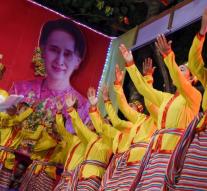 rangoon - The new president of Myanmar has set free dozens of political prisoners again. The release of the 83 people to contribute to national reconciliation, the government said Sunday. Earlier this month, arrived about a hundred prisoners.

Among those released are now four journalists and a driver of a newspaper. The five were sentenced to ten years hard labor in 2014 because they would have reported on a factory of the army where chemical weapons were manufactured.,, As far as I know, the people who are considered by human rights organizations as political prisoners, '' said a source at the prison.

The new government of the National League for Democracy, the party of Aung San Suu Kyi, has released since she took office on April 1 282 people or the charges against them deleted.